Well that’s what the picture says. In very faint black marker it says ‘niet vloeken’ (I swear it’s there), which means ‘don’t swear’. This is what happens when someone gets fed up and colourful. This person could just get a ‘nee-nee’ sticker, a sticker that says ‘no’ to unaddressed mail and ‘no’ to bulk mail, although it isn’t a guarantee.

The Dutch often say that Amsterdammers are rude. They are more uptight and stressed than the rest of the country, but the population is dense and to the dislike of some, too diverse, which is code for not particularly integrated. Amsterdam is a city of 730,000 inhabitants that has to create more polders in order to keep people in the area. It also gets 1.5 million tourists a year, literally congesting the city centre and making walking, biking or taking public transport downtown stressful during most of the year.

Move away? Sure, houses and flats are somewhat cheaper, but then your travel time goes up, no matter if you take the car or train. The traffic jams are really heavy and the trains are often delayed or cancelled. There are many companies that will not hire anyone who lives more than 10 km away from Amsterdam to save on having to pay travel expenses.

All the good stuff about Amsterdam we try and keep to ourselves. The centre provides all the entertainement, museums and cultural bits to keep people busy, while the locals have their parties and events in a sort of subspace only they know is there. This subspace takes time to find and eventually becomes the only thing you see after a while. The rest you have to try and inhibit, something I think the Japanese probably know a lot about. 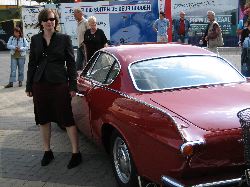 I’m finally nearing the end of my driving lessons here in Amsterdam and enjoy looking at cars. When I was young I used to skim through my dad’s Road and Track magazine. Here in Europe, I watch Top Gear. I use to live close to the Circuit Gilles Villeneuve in Montreal, where the Canadian Grand Prix is held, but now I live close to the Circuit Park Zandvoort, where one of the most important Formula 3 races is held. I’ve been to both and have many good memories. The car beside me is a Volvo 1800, made famous by a pre-James Bond Roger Moore in the British television series, The Saint. I was told it was a tough ride. I am still searching for my future first car.

Comments Off on Cars galore

I’ve never used Dreamweaver software and don’t plan to, but it was surely named after that seventies’ song by Gary Wright, a song which many too young for the 1970s (lucky you) may remember from the first Wayne’s World film. What’s up with dashboard? The new version of WordPress has a dashboard, Mac OS X Tiger has a dashboard, and all kinds of custom software has been blessed with dashboards. If only my computer was a car! My song of choice for dashboard is “Paradise by the dashboard light” by Meatloaf. What next, cockpit sofware for my computer? Get real, I want submarine dials and knobs with big torpedoes and scream dive! dive! dive!

Comments Off on Dashboard 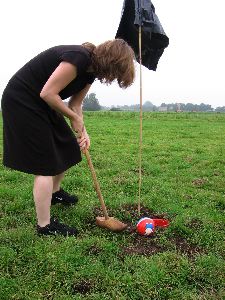 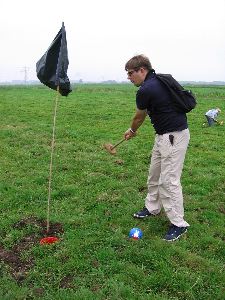 Trying to find something to do outside the house on a Sunday when most of the country is inside, I checked out a bio food fair, which I knew would at least have free food. A Dutch farmer in the area held an open house complete with cows, sheep and pony rides for the kids.

Besides getting some fresh air, I actually had fun playing “boerengolf”, or farmer’s golf. The wooden club has a Dutch clog on the end, the ball was a children’s one, and the holes are made with play buckets pushed into the ground. The field usually has cattle on it and is difficult to walk on, let alone golf. I did pretty good and it was a lot of fun!

Comments Off on Golf the hard way
Older posts »