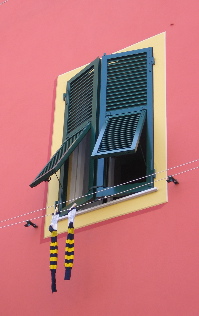 After a whole summer of not doing much in the way of sports, my karate lessons started up again, and to my surprise, I’m not aching half as bad as I thought I would be. I’m just a yellow belt working up to an orange one in Goju Ryu karate, or “hard-soft” karate, which is what it looks and feels like. I’m lucky enough to train with the top teacher in the Netherlands in Rotterdam, the city that will be hosting the 4th Karate-do Goju-kai World Championship 2005, as Rotterdam is the European Capital of Sports for 2005, an originally Italian idea.

I tried out karate for the hell of it, without any idea of what I was getting into. I wanted to find a sport where I also had to think and not just jog like a hamster on a treadmill. Training is two straight hours, no stopping, no water drinking, with 90% of everything in Japanese, but you finish feeling like you’ve accomplished something. The people I train with come from many different nationalities, which is exactly what Rotterdam is like.

Opposite: yet another Italian window from Genova.

Comments Off on Sport socks