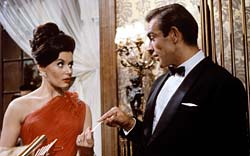 About ten years ago, I had a particularly crummy job for a few months during the summer that did not pay well. The weather was extremely hot and it was difficult to sleep at night. I had no cash to go out, so I would open all the windows and watch TV until I fell asleep. Lucky for me they were showing two James Bond films a night for two weeks or so and showing them late when the heat was more bearable.

Now I realise that I really like these films because of the music, the music inspired from it, the humour and the cars. I even read somewhere that 50% of the entire planet knows who James Bond is. As for music with that JB feeling, I recommend Secret Agent Internet radio from Soma FM in San Francisco.