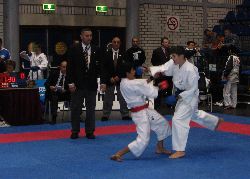 On Monday, after having the chance to train with Goshi Yamaguchi, the ‘Grand Master’ of the style of karate known as Goju-ryu, from which Goju-kai stems, I reflected on everything I photographed and wrote about during the three days of the World Championships, which recently took place in Rotterdam. As a yellow belt with a karate exam in less than two weeks, I now understand that when karate is done right, it is really nice to watch. I also figured out that when I do something right, it is motivating enough to travel a total of three hours early on Saturday morning to get to karate class and back. Imagine, I used to live 10 minutes away from the dojo (training hall)! If someone had told me I would be doing karate as a thirty something, I never would have believed it.