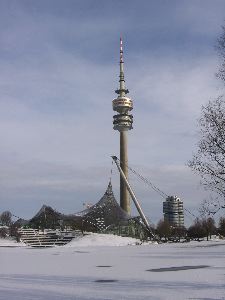 Of all places to spend New Year’s Eve when you live in Amsterdam is Munich, Germany. One Dutch friend of mine just emigrated there and two old friends from Québec just moved there. It was also very easy to steer the conversation towards the ill-fated Olympics of 1972 because the view out the window was that of the amazing Olympic Stadium itself. No, I haven’t seen the movie, but I did not like the reviews I read. I’m also sheepish when it comes to going to the cinema.

What struck me was the obvious retro atmostphere of the Olympic Park, as it reminded me of Montréal, which hosted the 1976 Olympic Games. Unlike Munich, a well-established, rich German city, Montréal was a teenage Canadian city, aching to be accepted as a world-class city. Forget all that; the Munich stadium is smallish, easy to walk around and the tower overlooking the stadium provides a spectacular view.

Comments Off on Munich